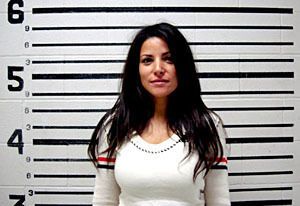 Mary Delgado isn’t the first reality star to find herself in trouble, but the incident is getting extra publicity because this is her second publicized run-in with the law.  In 2007 Mary Delgado was arrested for punching her Bachelor fiancee, Byron Velvick, in the face (the second picture was Delgado’s mug shot from that round).  She seems like a real catch.

TV Guide noted that, “Mary Delgado was ‘loud and belligerent’ while being transported to the Val Verde Country Correctional Facility, even kicking the radio inside the squad car...”

Mary Delgado’s arrest is all part of a growing celebrity misbehavior trend that is creating a lack of role models.

On a separate note, kuddos to Delgado for having one of the best mug shots I’ve seen yet.  Maybe this is all part of a publicity stunt…
3.1
Score
Popularity
Activity
Freshness
Attend Future Festival