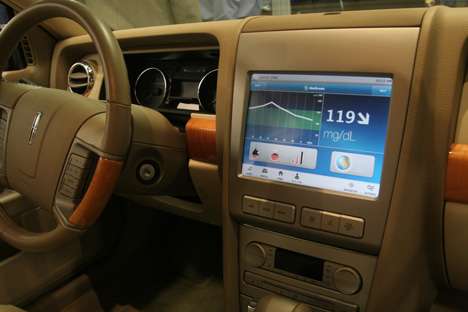 Ayman — June 13, 2008 — Autos
References: medgadget
Experiencing a sugar, or glucose, crash while driving can be very dangerous for both the driver and others on the road. In order to minimize the danger of such a scenario, Medtronic Diabetes has developed a new M-POWERED car that constantly monitors the driver's blood sugar levels.

A glucose crash is when a diabetic person's blood sugar levels plummet from numbers like 120 to 60 mg/dl within a matter of seconds.

Unveiled at the American Diabetes Association (ADA) scientific session at Moscone Center in San Francisco on June 6-10, the Lincoln sedan is equipped with a system that "wirelessly incorporates a patient's continuous glucose monitor with a dashboard" to ensure driving safety.

According to the company's press release, "The M-POWERED concept car would allow a person with a continuous glucose monitor (CGM) device to receive readings of their blood sugar through both audio and visual cues from the car's dashboard."
4.1
Score
Popularity
Activity
Freshness