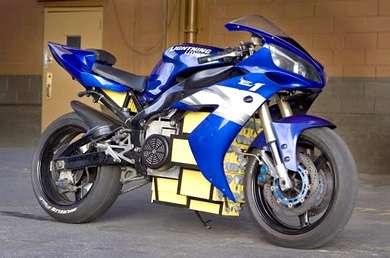 The cost of the conversion was around $15,000, but Lightning Motors expects they can reduce the cost to the $6k - $8k range.

The bike was just featured in the LA Times, who compared the ride to the Tesla supercar, "Unlike the Tesla electric sport car, which is powered by thousands of tiny batteries, the R1 conversion uses just 28. Each of them is 90 amp-hours at 3.2 volts and 6.6 pounds. Together, they weigh less than everything that was taken off the bike to make it electric. While the majority of the batteries are concentrated in a Mondrian-esque block where the engine used to be, they're also tucked under the seat where the exhaust was once located, to mimic the weight distribution of a stock R1."

105 Wicked Motorcycles
From Eco-Friendly to Model-Sporting, This Motorcycle Collection has it All