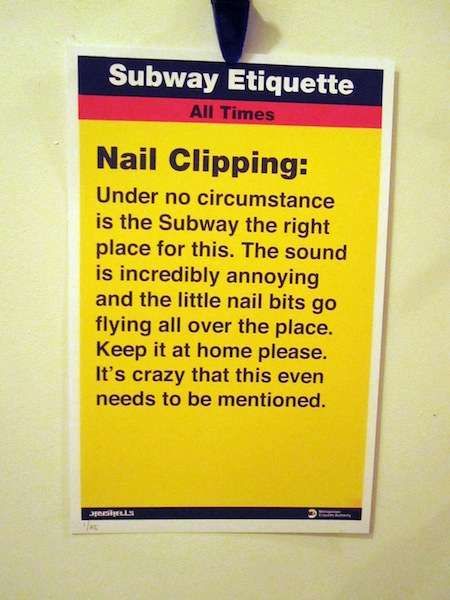 Souzan Michael — August 30, 2011 — Art & Design
References: animalnewyork & buzzfeed
Share on Facebook Share on Twitter Share on LinkedIn Share on Pinterest
New Yorkers, next time you're about to step on the subway, be on the lookout for the Jay Shells Subway Etiquette posters. The artist, whose real name is Jay Shelowitz, has launched a guerrilla campaign by the fictional 'Metropolitan Etiquette Authority.'

What this really means is that while they are not official posters of any kind, their messages are certainly true. With topics ranging from nail clipping to eating to hygiene, these humorous, yet somewhat harsh posters will hopefully benefit the New York City subway system and public transportation users.

Everyone has been there -- having to deal with a coughing, sniffling, smelly subway passenger who always seems to be standing a bit too close to you for comfort. With the Jay Shells Subway Etiquette posters, hopefully rude and inconsiderate subway passengers will become a thing of the past.
6.8
Score
Popularity
Activity
Freshness
Get the 2021 Trend Report FREE