Inspiration Comes From the Most Extreme Places

Your Perspective Determines Your Destiny
Next
Set of
Related
Ideas 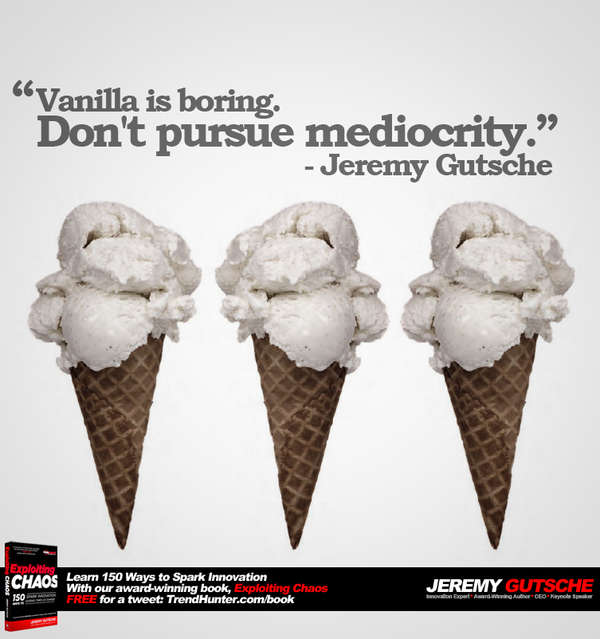 Jaime Neely — June 3, 2013 — Business
References: jeremygutsche
Share on Facebook Share on Twitter Share on LinkedIn Share on Pinterest
Innovation conference speaker Jeremy Gutsche constantly urges his audiences to get out of their comfort zones and to act crazy. He believes that brands need to push themselves and to test out seemingly wild ideas. If a brand is particularly good at something, the innovation keynote speaker encourages trying something new and different.

Jeremy's award-winning book 'Exploiting Chaos' -- which you can read for FREE here -- explores the ways ice cream giant Ben & Jerry's pushed the boundaries in its industry. He explains how the brand abandoned tradition and mediocrity.

"To become a player in the delicious ice cream market, you need a cult following. You need to find the next 'Cherry Garcia.'

Cherry Garcia is a flavor of Ben & Jerry's ice cream that contains pieces of cherries and chunks of chocolate. It was launched in 1867 as a tribute to Jerry Garcia, lead guitarists for the Grateful Dead. Since its launch, it has become the most popular flavor offered by Ben & Jerry's.

In fact, despite being a luxury product, Cherry Garcia helped Ben & Jerry's to grow sales 400% during the 1900-91 recession.

The whole world does not crave cherry and chocolate ice cream, but for the millions who do, there is no substitute."

Instead of putting out another vanilla or chocolate flavor, Ben & Jerry's took a chance and offered its customers a crazy and unusual flavor. Pursuing mediocrity means missing out on a similar success experienced by Ben & Jerry's.
5
Score
Popularity
Activity
Freshness
Attend Future Festival