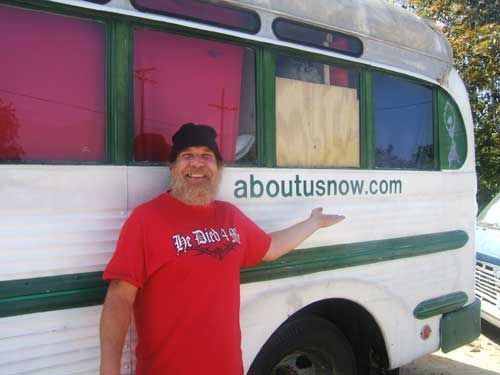 Jeremy Gutsche — June 27, 2006 — Business
References: wired
Share on Facebook Share on Twitter Share on LinkedIn Share on Pinterest
Dozens of homeless people run popular blogs which they update in public libraries and in some cases, with their own personal laptops. The homeless man shown here, Happy Ivy, even advertises his website on a $400 bus which he also calls home. His site, Aboutusnow.com, is a political-advocacy site dedicated to helping the homeless. He also hosts an internet TV show.

"Happy Ivy doesn't have a bathroom or a kitchen in the bus he calls home. He does, however, have a video-editing station. Living in a squalid, Woodstock-style bus parked in a Fillmore, California, orange grove, the 53-year-old homeless man charges a power generator from a utility shed and uses Wi-Fi from a nearby access point." (Wired)

Another homeless man, Kevin Barbieux, runs "The Homeless Guy", which is the most popular homeless blog. He updates his blog daily during hour-long visits to a Las Vegas library and features video interviews. "It's the only real success I've had in my life," he said. The slogan of his site is, "There is more to homeless people than being homeless."
2.6
Score
Popularity
Activity
Freshness
View Innovation Webinars