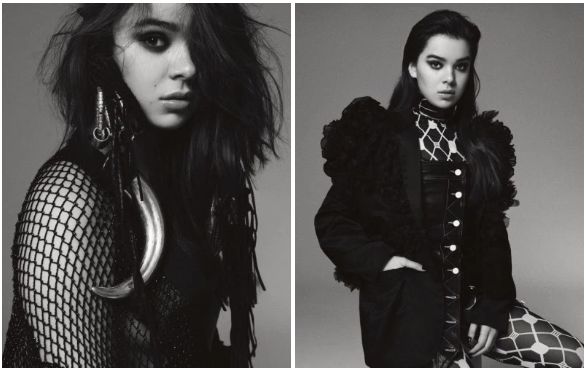 Meghan Young — April 1, 2016 — Fashion
References: interviewmagazine & fashiongonerogue
Share on Facebook Share on Twitter Share on LinkedIn Share on Pinterest
Those who are familiar with American actress Hailee Steinfeld, who made an impactful debut into the world of feature films by starring in The Grit, may not recognize this Hailee Steinfeld. That's because her innocent young girl persona has been replaced with a sultry young woman persona. Channeling her inner rockstar, the brunette beauty shows just how to welcome the summer season.

Appearing in the latest issue of Interview magazine, Hailee Steinfeld was shot by photographer Jack Waterlot. Clad in everything from Zana Bayne’s leather harness to a Dolce & Gabbana dress, she is captured in black and white. In the accompanying article, she talks about her love of music, "Whatever project I’m working on at that moment has 110 percent of my attention, but there’s always a part of me that has [the music] in mind."
5.8
Score
Popularity
Activity
Freshness
Get Better and Faster