Glow in the Dark Lingerie 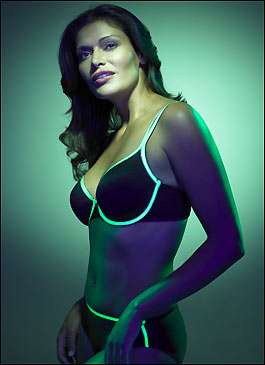 Jeremy Gutsche — April 23, 2007 — Naughty
References: playtex
Share on Facebook Share on Twitter Share on LinkedIn Share on Pinterest
Playtex has released a line of glow in the dark lingerie to celebrate the 10th anniversary of its Moonwalk Charity. During this year's Moonwalk, actress Lisa Faulkner and GMTV star Kate Garraway will sport the glow in the dark lingerie, and we can expect the product to be launched thereafter.

The Moonwalk Charity was born from Nina Barough's vision. 10 years ago, Nina and 12 of her friends power walked the New York Marathon in their bras to raise money for Breast Cancer Research. Since the first walk, the charity has raised nearly £27 million. To further build on this concept, the Playtex Moonlit Marathon takes the concept to a new level. Roughly 15,000 walkers now charge through the street in decorated bras.

You can find out more about the May 19th Moonwalk HERE.

100 Breast Cancer Fundraisers
From Cosmetic Transformations to Self Diagnosing Stickers