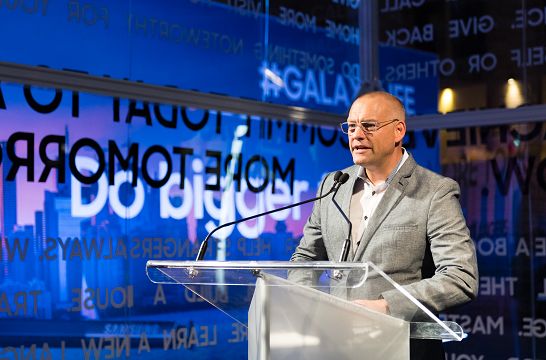 Shelby Lee Walsh — October 3, 2017 — Tech
References: samsung
Share on Facebook Share on Twitter Share on LinkedIn Share on Pinterest
Arriving at the #GalaxyLife party, attendees were met with abuzz, with conversations, music and screens of all sorts. The screen that glowed brightest at this event, however, was the Samsung Galaxy Note8, as it was the first official launch for the Canadian market. With 84% of the surface being screen, this is a phone that is striking in looks, as well as features.

When asked one the things that would surprise people when they pick up this phone, Mark Childs, Chief Marketing Officer at Samsung Electronics Canada, dove into the dual camera. “I had an amazing opportunity to go up to Yellowknife to see the Northern Lights with some YouTubers and creators and the thing that drove them crazy was the dual camera. You can create a live focus. I can change the focus of the background, so I can produce shots [on this phone] that look professional.” He pulled up a stunning array of SLR-looking photos of the Northern Lights.

Shortly after, we dove into some of his other photos, where he used the Samsung Galaxy Note's new technology to enhance the depth of field. “You can do it while you’re taking your photographs, or afterwards.” Manjit Minhas, Co-founder and CEO of Minhas Breweries, Wineries and Distillery (also well known as a Dragon on Dragon’s den) was also hosting and speaking at the event. She hopped in adding, “It’s great because I don’t have to carry around an SLR to take photos of my kids.”

The three of us together, we dove into multi-tasking features, which allow users to do things like pull up their email the same time as their calendars. Minhas chatted about how a device like this will have an impact on her personal and professional life. “As a CEO, a mother a wife, I don’t have to carry around multiple cameras and phones. One phone It makes your life so seamless… and easier. It also helps your life to be more productive. We all want to get more hours out of our day.”

I asked Minhas and Childs how they look at innovation so that you’re on the bleeding edge rather than following the pack, and Minhas stated that, “As an entrepreneur, everyday I wake up thinking about how am I going to be better today? Not only as a person, but as an organization? And what tools are we going to use in our day-to-day, in our offices and manufacturing… I think the pursuit of excellence is what drives innovation. You can’t think about what you already did, you have to think about what’s next.”

“Technology and pace of innovation is inside of us,” says Childs. “At Samsung, we’re always listening, watching and observing trends.” When I asked to say what is an innovation of Samsung that Childs thinks is noteworthy, he responded, “The S Pen is so innovative. I can now write without turning my phone on. It’s a black screen so I’m not disrupting anyone in a quiet auditorium.”
When I asked about how to get innovative, Minhas says to, “Get dreamy! …It’s about getting outside of your comfort zone.“

She’s not stranger to doing this, as her film “Living Proof” debuted at TIFF focusing on the ecosystem of MS, as their President suffers from this disease. Where does she find her inspiration and what helps get those creative juices flowing to fuel empires like Minhas brewery and her production company? “Our research and development team are always looking for new flavors and new beers, so while I’m travelling the world, I’m taking photos and saying written notes to them saying, “Try this! I live on the road, so the creativity for me, also comes from seeing those things.”

For Childs, “Innovation is part of our every day. To be inspired, you have to go out of your comfort zone. You need to take a chance on something that isn’t proven yet. In technology, not everything is successful. For me it’s about pushing yourself not just to work with technology that’s innovative, but be innovative.”

The event was topped off by inviting Torontonians to come into a giant glass cube to share with cameras something they wanted to pledge to do something noteworthy. They signed their names, and then their pledge videos were sent to them and also displayed in a 360 video wall orb at the event.