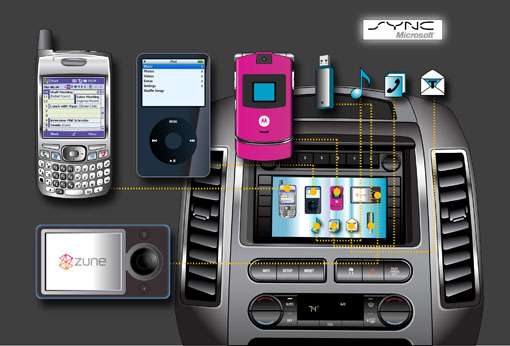 In Car Speech Recognition for Your iPod, Phone and Navigation

Jeremy Gutsche — July 30, 2007 — Autos
References: trendhunter
Share on Facebook Share on Twitter Share on LinkedIn Share on Pinterest
Say, "Play Artist Black Eyed Peas," and Ford Sync will cue up the Peas in your iPod, Zune or even USB drive. "Dial Mom," and Ford Sync will use your bluetooth enabled phone to ring your mother. This is the magic of Ford Sync's revolutionary new technology, developed in partnership with Microsoft.

Earlier this year, Trend Hunter covered the initial release of Ford Sync, and we were excited about the prospect to fully integrate a music player, phone and navigation system with a car's audio and voice recognition system. The technology will be available in select Ford vehicles later this year.

I had a chance to spend an hour or so reviewing the system with Mark Schirmer from Ford Communications. In short, I was incredibly impressed.

The speach recognition was much better than I expected. Ford Sync was easily able to pick out my voice as I beckoned the system to play my favorite music and randomly call people in Mark's phone.

Finding music among thousands of mp3s was made simple. For context, I currently use a high end Alpine receiver to dial through my iPod... and I hate it. In contrast, this system was fast and easy.

The integration with the phone was seamless. Ford Sync wirelessly read Mark's phone, pulling up his address book, recent call list and text messages onto the car's display screen. When a new text message arrived, the car read the message aloud. It even knew to read words like 'LOL' as 'Laughing Out Loud'.

Unfortunately, the speech recognition can not write your text messages, but a menu of a dozen common replies does pop up for you to respond with the click of a button.

As another con, you'll have to modify the way you think about getting music. Every time you want to get a song, you have to say, "User Device," then when it finds your iPod, you have to say, "Play Track X," or, "Play Artist X." If it makes a mistake, you need to repeat that sequence.

The system seems to be easily distracted by background noise or speaking too fast... So you'll need to slow down your speach, silence your children, and keep the roof on in your convertible...

Despite the cons, Ford Sync blew me away. If I could add this technology to my ride, I would in a second. However, you can only buy Ford Sync in new Ford cars... Well done Ford, well done.

If you were relatively neutral in your car-buying-decision between a Ford and any other car, this technology will sway your vote.

â€œSync is what today's generation and today's drivers demand in connectivity," noted Derrick Kuzak, group vice president, product development, Ford Motor Company. "Not only does it offer hands-free phone operation and iPod®, Zune or MP3 player connectivity, it's built on a software platform that is upgradeable and will allow us to offer new features by simply upgrading the software."
5.7
Score
Popularity
Activity
Freshness
Access Advisory Services