Top 46 Games Trends In May

Top 100 Health Trends in May 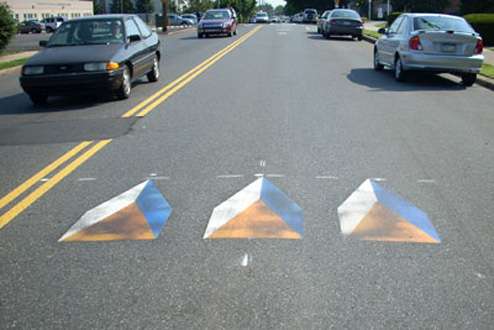 Philadelphia Using Psychedelic 3-D Tricks to Slow You Down

Jeremy Gutsche — June 15, 2008 — Tech
References: kyw1060 & gizmodo
Philadelphia is now using fake speed bumps to slow you down. The city is testing out the tactic at approximately 100 intersections.

The belief is that the high tech 3-D decals will freak you out. But I think they’d work better if you were intoxicated, at which point you shouldn’t be driving at all.

Charles Denny, the city engineer noted, “The goal is to change the mindset. The goal is to get the drivers to be less aggressive.  We want them to go what the speed limit is, not to assume that its a recommended speed, to know that its a speed limit that’s appropriate on residential streets.”

A more powerful technique was used several years ago when a US school board decided to create fake cardboard cutouts of little kids.  You’ll only almost run over a fake kid once before you slow down in school zones.

100 Creative Decals
From Pimping Out Your iPad to Home Decor