Don't Speak to Your Customers, Speak with Them 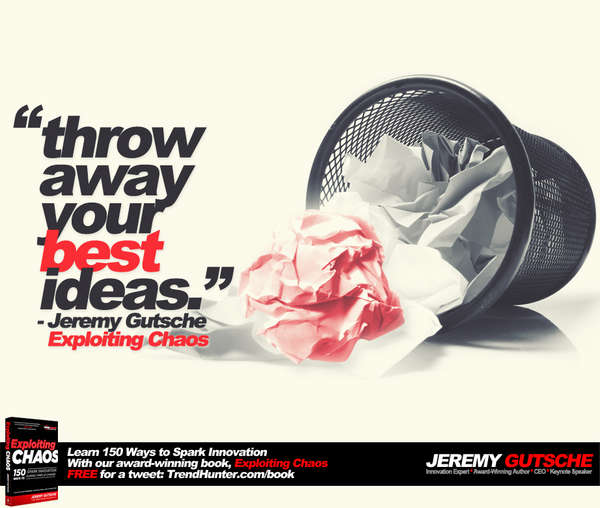 Jaime Neely — February 21, 2013 — Business
References: jeremygutsche
Share on Facebook Share on Twitter Share on LinkedIn Share on Pinterest
One of Jeremy Gutsche's more unconventional creativity strategy tips he offers to clients and audiences is to throw away their best ideas. The innovation keynote speaker believes that by removing your best idea, you become forced to raise the bar on everything else. This idea is rooted in Jeremy's philosophies that encourage experimental failure and intentional destruction.

To demonstrate how this strategy is applied in the creativity process, he shares the methods used by award-winning documentary director Peter Lynch:

"When creating documentary films, Peter shoots a lot of footage. During the process, patterns emerge, and certain ideas resonate. The danger is that these ideas become points of fixation.

In the 1980s, Peter was making an unusual film, titled Project Grizzly. The documentary features an eclectic man whose life mission had been the creation of a grizzly-bear-proof suit of armour. The man's goal was to build the suit and put it to the ultimate life-thrilling test: to see if a bear would kill him or if the suit would offer enough protection.

Within a week, Peter recorded footage of the man tumbling down a cliff, setting himself on fire, getting hit by a speeding truck, and getting his friends to beat him with baseball bats. Bizarre.

The footage was leading to Peter to focus on just how crazy this man has become. However, Peter removed the most bizarre footage. This forced him to look beyond the concept of insanity to unlock a deeper plot: the man's search for meaning.

His concept is that your best idea can blind you to breakthrough creativity."

Throwing away your best idea may seems like a risk or mistake, but Jeremy sees it as a form of intentional destruction that can lead to superior ideas and more success. For more tips on creativity and innovation, check out a version of his book 'Exploiting Chaos' for FREE here.
5.5
Score
Popularity
Activity
Freshness
View Innovation Webinars