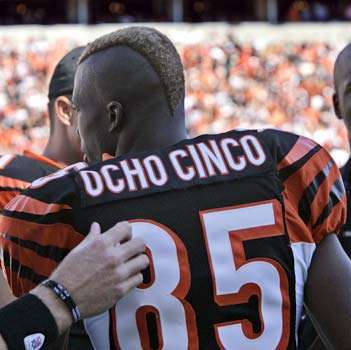 So what would change a multi-million dollar athlete to change names? (hehe, leading question)

'Chad Ocho Cinco' explained that he changed his name after an experience at a cuban festival.  I surmise this was an attempt by Chad Johnson, I mean Chad Ocho Chino, to get some publicity and increase his appeal to sponsors.

This isn’t the first time Chad put the name Ocho Cinco, which means ‘eight five’, on the back of his jersey.  However, the NFL made him remove the non-legal name from his back.  However, with a legal change to his surname, the NFL must now recognize 85 with his new name.

About the mid-life name change, 'Chad Ocho Cinco' noted, “It’s something I don’t think anyone has ever done before.  Have I ever had a reason for why I do what I do? I’m having fun.”

Bonus: I’m sure it makes his father re
3.5
Score
Popularity
Activity
Freshness
Get Better and Faster