The Decision to Go Back to Work 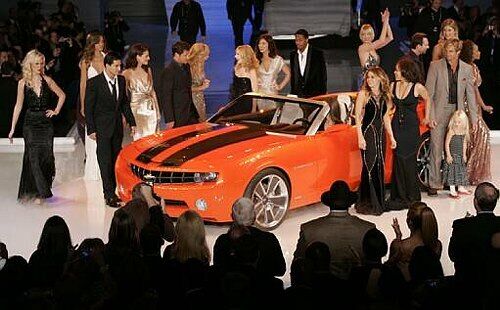 The GM Style Event at NAIAS

Angela Lowe — January 9, 2007 — Autos
References: gmtv.feedroom
Share on Facebook Share on Twitter Share on LinkedIn Share on Pinterest
In our interviews with top designers at GM and Ferrari, we've learned that the auto industry is looking closely at the fashion industry as a source of inspiration. As this link becomes more significant, we're starting to see the two worlds merge. This weekend, GM revealed its latest cars at a celebrity fashion car show.

Jeremy Gutsche and I were invited by GM to come down to the event. Called the GM Style Event, the fashion show was held in Detroit for the North American International Auto Show (NAIAS). Several major revels occured at NAIAS, with the new Camaro being the star of the fashion show. GM has been trying to reinvent its brand and gain more recognition in the automotive market, so the show fits perfectly with their goals.

Style, fashion and design are so closely linked I think we can expect to see more events like this in the future.