CTV National News: Jeremy Gutsche on Trends in 2012 and Resolutions

CTV News: Arrests on YouTube and the Housing Bubble
Next
Set of
Related
Ideas 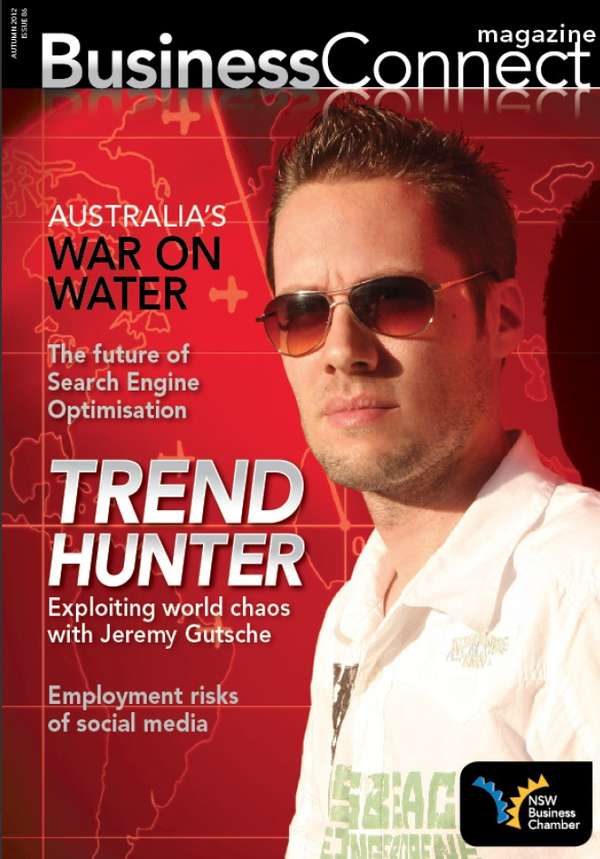 Armida Ascano — August 13, 2012 — About
References: nswbusinesschamber.au
Share on Facebook Share on Twitter Share on LinkedIn Share on Pinterest
Though Jeremy Gutsche has given his innovation keynote speech at over 250 engagements thus far, his speech at the Australian Chambers Business Congress on August 15-17, 2012 will be his very first in Australia. Gutsche is profiled as Chief Trend Hunter, author of the award-winning book Exploiting Chaos and an anticipated speaker of this Congress in Business Connect Magazine's Autumn 2012 edition.

Also appearing on the cover of the issue, Gutsche talks to Business Connect Magazine about an array of topics, including the importance of the consumer, organizational culture and of course, social media. He explains the concept behind Exploiting Chaos as the idea of using failure as motivation -- "Win like you're used to it, and lose like you enjoy it."

"How does Trend Hunter work?
We have a global network of 100,000 people who find ideas in pop culture, fashion, design, technology – whatever might be innovative, and we post those into a portfolio. There’s a whole other side for businesses where we filter through the noise and look for the patterns of opportunity, which are published in trend reports and newsletters. Large companies like Nestle, Kelloggs, and Fortune 500 brands pay us to recreate Trend Hunter for their own innovation teams. As for me, I’m a guy who spends a lot of time researching chaos and innovation. So I talk to companies about how you can use these periods to reinvent.

Can you expand on this idea of exploiting chaos?
When there are periods of chaos in business and society, the natural reaction is to become overly conservative in your actions. The skill is to see how your needs are evolving, and innovate to update. When your competitors are conservative as well, it creates a double-sized opportunity. If you look back historically, you see companies like CNN, MTV, Microsoft, Burger King, FedEx and Apple – they all began in periods of global recession. After all, people still purchase and consume in periods of change. A good example is Fortune magazine, which commenced 13 months after the 1929 Wall Street crash. It was actually priced at one dollar per issue, which could buy you a wool sweater in those times. But they grew their subscriber base to 500,000 and $7 million in modern day profits. How could they achieve this profit during the Great Depression? The reason was they were solving a new need. People were losing jobs through decisions being made behind boardroom doors in New York City. Fortune magazine provided a glimpse behind those boardroom doors – and that’s what people will pay for. You see failure in a positive light. Why? Failure is an outcome of experimentation. The better you become at something, the more successful and complacent you become. You don’t feel as though you have to change. One of my favourite case studies I’ll discuss at the Congress is Smith Corona – inventor of the typewriter. They had a hundred-year history of inventing everything in the typewriter space, from spell checkers to word processors. Along the way they became fixated on pursuing the rational outcome, which is to make the best typewriters in the world. They actually pulled out of a joint venture with Acer to develop computers. By comparison to the typewriter, the new realm of computers seemed too risky. Put yourself in the shoes of a Smith Corona manager. Which team would you want to be on? The team that makes the most profit, gets the big bonuses, and can pay off the mortgages - that’s the typewriter team. Or do you want to take a risk on an unknown commodity. More on that case study at the Congress! You have to force yourself to consider new opportunities that may result in failure. As I say, ‘Win like you’re used to it, and lose like you enjoy it.’

How important is the consumer in your thinking?
I think it’s important to have customer obsession. This is something that any business can do. It’s the chance to make a connection with your customer, especially in times of chaos. If you attempt to understand the customer through trend spotting or personal connections, you can better understand how their needs are evolving. I have a good case study involving the head designer of General Motors. He designed a vehicle called the ‘Escalade’, which became an icon in rap culture, but that wasn’t the intention. When I asked him how it happened, he said it was a happy accident. The car had been designed for 45 to 60-year-old males. Now, he could have had his team conduct research, or a survey, or visit dealerships. Instead, he chose to personally visit the most dangerous neighbourhood of Detroit. You can imagine what sort of person would be driving the car – a drug dealer! He found a car with its owner and said, ‘Hello young man, I designed this vehicle, and was wondering if I could ride with you for the day.’ This process appears difficult, but it enables a much deeper understanding of the customer world, and what makes your customers think differently. The General Motors example happened seven years, and over that time, the Escalade has enjoyed high sales because they keep thinking about how to position the car for that demographic.

What role does organisational culture play?
I adhere to the saying that culture eats strategy for breakfast. It’s something that comes from outside the Ford strategy war room. It doesn’t matter how good your PowerPoint slides or Excel model are. What matters is whether you can mobilise your team to obsess about the customer, to tolerate failure, and really be passionate about taking things to the next level.

What effect is social media having on emerging trends?
The answer is speed. One of my favourite case studies is a tongue-incheek story we published five years ago. The half suit. A suit that cuts off at the waist, and is ideal for webcam meetings while working at home. When published, it had 33 million impressions in six months. Since then, Google and Facebook have emerged. To put it into perspective, Kony 2012 had 120 impressions in two days. They had political leaders and celebrities – even Justin Bieber – tweet about it. It was passionate, and it felt authentic. There are two important points. Firstly, if you can make a real connection, your story will travel faster than it ever has before. The second point is that you can test which messages sell. In word-of-mouth days, you could never really quantify what messages were most successful. Today, you can study which messages are working, and think about a different style of communication. We choose words carefully at Trend Hunter to maximise impact. That’s a skill I’ll definitely explore at the Congress.

Are there similarities between business in Australia and your native Canada?
I think Canadians and Australians are very similar in their thinking, which at times can be conservative. There’s an interesting parallel about how we can motivate our managers. We can take a more aggressive approach to business, and push out of our comfort zone, especially in times of chaos.