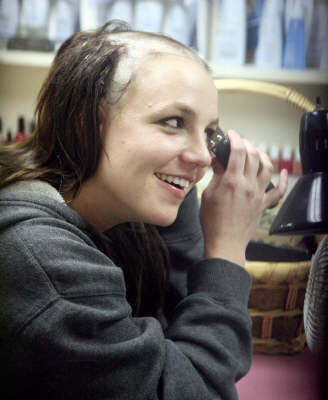 Jeremy Gutsche — February 19, 2007 — Fashion
References: trendhunter
Share on Facebook Share on Twitter Share on LinkedIn Share on Pinterest
Britney Spears bald? That's right. In a fit of anxiety, Britney Spears has shaved her own head completely bald. Will this start a new trend of teenage girls shaving their head? OR - more likely - will this mark the final chapter of the book titled, 'The Downfall of Britney'.

If we rewind a few days, we learn that the hard partying mother of two had just checked in, and then checked out of rehab. After her 24 hour stint, she headed down to the Haircutting Studio in Tarzana and told the stylist she was frustrated with the pressure her hair caused. However, the stylist, Tagnozzi, refused to shave Britney's hair, stating, "I won't touch that."

Then, Britney Spears decided to grab the shaver and get rid of all that hair herself. When the story first broke, Bald Britney was seen at a tattoo parlour in LA getting some new ink on her neck (a pair of red and pink lips).

The video and pictures of Britney Spears bald are pretty shocking. If you are going to shave your head at least get some charity dollars out of the deal.