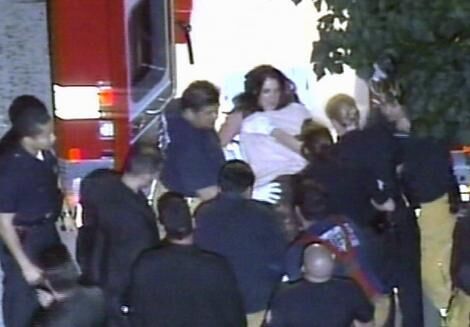 After a three hour custodial dispute, Britney Spears refused to hand over her two sons to K-Fed. The stand-off included six police cars, an ambulance, a fire engine, and media helicopters hovering above.

The police officers showed up at Britney's home, but eventually she was carried out to an ambulance. Officer Jason Lee noted that Britney was under the influence of an unknown substance.

Britney was eventually escorted to the Cedars Medical Center for psychiatric evaluation. She remains under a 5150 hold, which per the medical code is used, "when any person, as a result of mental disorder, is a danger to others, or to himself or herself, or gravely disabled."

Also alarming, son Sean Preston was rushed to an emergency room in a following car. Lets hope its just for a visit.

Will Britney Spears be arrested when she is released?

Britney Spears' police stand-off was spurred by her limited visitation rights and custody fight over her two sons Sean Preston and Jayden James.

Unfortunately, Britney's troubles continue to escalate, driving media attention and global gossip. It's actually kind of sad to see the amount of paparazzi frenzy in the enclosed video, but then police stand-offs over custody battles are also kind of sad.