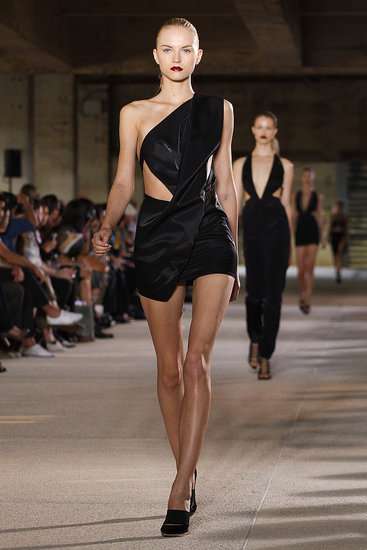 Souzan Michael — September 30, 2011 — Luxury
References: style & fashionologie
Share on Facebook Share on Twitter Share on LinkedIn Share on Pinterest
Leave it to Paris Fashion Week to start off the week with a bang, which the Anthony Vaccarello Spring 2012 collection did flawlessly. As New York, London, and Milan Fashion Weeks come to an end and the world awaits what Paris Fashion Week has to bring, it becomes more clear than ever that French fashion houses will never disappoint.

The Anthony Vaccarello Spring 2012 collection was, unlike many of the prim and proper, colorful designs that were so prominent in Milan, New York, and London, dark and sultry. Dresses were predominantly black and featured some of the most intense, stunning cutouts seen on the runway in a long time.

Some of the designs in the Anthony Vaccarello Spring 2012 show show more skin than they cover up, and I personally could not be more excited about a designer who is not afraid to break away from the current trends and venture off into his own path.

If skin is in again, I'm all for it if it looks this good.
5
Score
Popularity
Activity
Freshness
Jeremy Gutsche Keynote Speaker