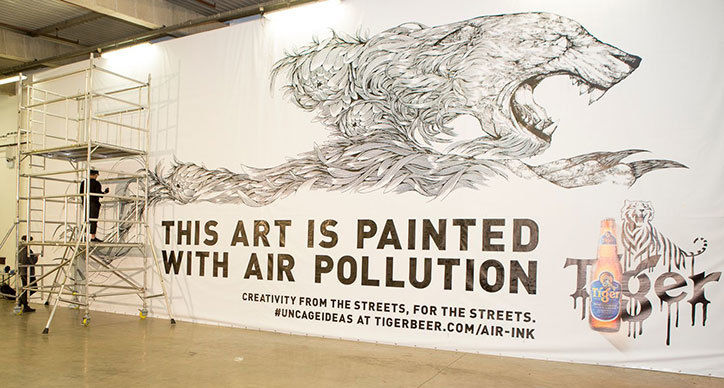 These Awareness-Raising Billboards Were Made with Air-Ink Technology

Laura McQuarrie — April 1, 2017 — Eco
References: air-ink & itsnicethat
Share on Facebook Share on Twitter Share on LinkedIn Share on Pinterest
Black ink can be created in a process that involves the burning of fossil fuels, but Graviky Labs believes there is a better way to go about this and introduced the world to Air-Ink as part of a Kickstarter campaign.

Now, to show off the kind of art that Air-Ink can potentially produce, a series of hand-drawn billboard murals were designed by Kristopher Ho for London’s Shaftesbury Avenue. The project is supported by sustainable beer brand Tiger, which is represented by relevant motifs, logos and product imagery in the art pieces.

To collect pollutants emitted from vehicles, a proprietary device called 'KAALINK' is used. By exhibiting works of art made with Air-Ink throughout London, Anirudh Sharma, of Graviky Labs says that the project is a means to "capture London’s pollution and repurpose it into more beautiful forms.”
4.1
Score
Popularity
Activity
Freshness
Attend Future Festival